Mysticism in 'The Philosophy of the Unconscious' (1869). 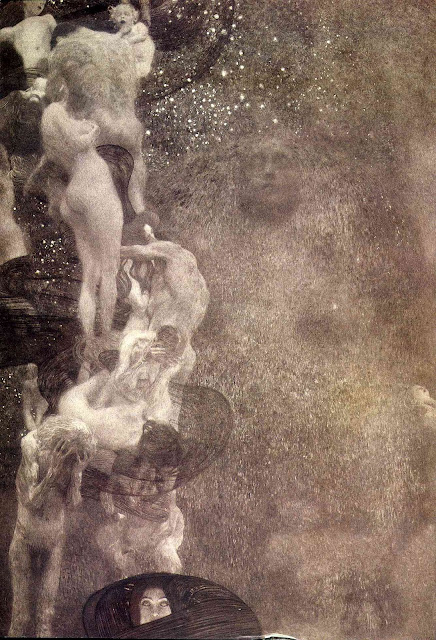 In 1868, when Freud was just 12, Von Hartmann published his three volume compendium of German philosophy, 'The Philosophy of the Unconscious', a work that would later inspire the author of 'The Interpretation of Dreams'. In his autobiographical writings, Jung says that he read Von Hartman's book "assiduously".

The following is an extract from the Introduction and the chapter 'The Unconscious in Mysticism' from the first volume of 'The Philosophy of the Unconscious':

"Philosophy is the history of philosophy,"- to that I subscribe with all my heart. He, however, who should take this assertion to mean that truth is to be found in the past alone would fall into a very serious error; for there is a dead and a living past in the history of Philosophy, and life is only to be found in the present. Thus in a tree, the solid stem of dead-wood which defies the storm is formed by the growth of earlier years, and a thin layer alone contains the life of the mighty plant, until in the next year it too is numbered with the dead. [...] It is not merely strength for which the living ring is debtor to its dead forefathers, but by holding them in its embrace, expansion likewise; wherefore for the newly sprouting ring, as for the tree, the first law is really to embrace and enfold all its predecessors, the second, to grow from the root upwards self-dependently. The problem how to fulfil these two conditions in Philosophy verges on the paradoxical, for... he, who attempts a new departure, generally presents some crude dilettante product from having insufficiently appreciated the previous historic evolution.
I believe that the principle of the Unconscious, which forms the focus in which all the rays of our inquiry meet, when conceived in its generality, may not improperly be regarded as a new point of view. How far I have succeeded in penetrating into the spirit of the previous development of Philosophy I must leave to the judgement of the reader.

...if the causes of all cosmical phenomena could be regressively traced, until they were referred to one or a few ultimate causes or principles, Science, which is one... might attain perfection by way of the inductive method.
Supposeing, however, any one to have solved this problem in a more or less complete form, the question still remains, whether, in imparting his convictions to others, he would do better to follow the track from phenomena backwards and upwards to the original causes, or to deduce the existing world from such first principles?

As the person to be guided dwells in the lower region of fact, his proper starting-point is there, and his upward course is always from the known to the unknown. On the other hand, to place him at the outset at the point of view of first principles would necessitate a salto mortale [deadly jump], and then he would have to proceed from one unknown point to another, only reaching the known again at the conclusion of his journey.
Every one is persuaded that his own opinion is the correct one, and consequently distrusts any novel doctrine. He must, therefore, know how another has arrived at his sublime results, if his own distrust is to be removed, and this requires the employment of the ascending method.

Deduction from first principles, supposing it to be absolutely flawless, may perhaps be imposing by its vastness, compactness, and subtlety, but does not produce conviction. For since the same effects can arise from different causes, in the most favourable case deduction only proves the possibility of these principles, by no means their necessity; it does not even give them a coefficient of probablity, as the inductive method does, never advancing beyond the bare notion of possibility.

After what has been stated, it would be inexplicable how anybody who had arrived at his principles by the inductive path should take the deductive method for their communication and proof... . The truth is, that philosophers who deduce their systems... , have arrived at their principles by the only way save induction which is open to them, viz, by a sort of mystical flight... . In their case deduction is the attempt to descend from the mystically acquired results to the reality to be explained, and that too by a path, which has always possessed a fascination for system-loving minds dazzled by the certainty of the results attained in the very different science of mathematics. For such philosophers deduction is certainly the appropriate method, since their given starting-point is the upper region of thought. [...] The principle may perhaps gain somewhat in comprehensibility by the process, but no power of convincing, and the attainment of a conviction of their correctness is left exclusively to mystical reproduction, as their discovery consisted in mystical production. It is the greatest misfortune for Philosophy, so far as it employs this method, that the assurance of the truth of its results is not communicable as in the case of inductive science; and even the comprehension of its content, as is well known, is no easy matter, because it is infintely difficult to pour a mystical conception into an adequately scientific mould. Philosophers, however, only too frequently deceive both themselves and their readers with regard to the mystical origin of their principles, and try, in the absence of good proofs, to give them a scientific support by subtle sophisms... . Here is the explanation of the circumstance, that people (save in the rare exception of a certain mental affinity) feel an extreme repugnance to the study of the philosophers, when they turn their proofs and deductions, but, on the other hand, are attracted and fascinated in the highest degree by the imposing compactness of their systems, their grand views of the world, their flashes of genius illuminating the darkest recesses, their deep conceptions, their ingenious apercus, their psychological acument. It is the mode of proof that inspires the man of science with his instinctive aversion to Philosophy... .

Thus a chasm yawns between the methods... . It may be concluded from this that the whole truth cannot be comprehended from one side alone, but that the matter must be approached simultaneously from both sides, and a survey made from opposite stations in order to find out the salient points, where a bridge can be thrown across. [...] Thoughts crystallise both from above and from below, as the mass of melted sulphur coalesces when the most prominent needles interlace, but not before. [...] The present time needs a spokesman who has comprehended both sides...

Chapter IX The Unconscious in Mysticism

...Religion is the ground and soil on which mysticism springs up most easily and luxuriantly; but it is by no means its only hot-bed. Mysticism is rather a creeping plant, which grows up exuberantly on any support... .

...it has accompanied the history of civilisation from early prehistoric times to the present day. It has doubtless changed its character with the spirit of the times, but no advance of civilisation has ever been able to repress it; it has maintained itself just as unconquerable in presence of the infidelity of materialism as against he terrors of the Inquisition. But mysticism has also performed priceless civilising services for the human race. Without the mysticism of Neo-Pythagoreanism, the Johannean Christianity would ever have arisen; without the mysticism of the Middle Ages, the spirit of Christianity would have been submerged in Catholic idolatry and scholastic formalism; without the mysticism of the persecuted heretical communities from the beginning of the eleventh century, which, in spite of all suppressions, ever sprang up again with renewed energy under another name, the blessings of the Reformation would never have dispelled the darker shades of the Middle Ages and opened the portals of the new era. Without mysticism in the mind of the German people, and among the heroes of modern German poetry and philosophy, we should have been so completely inundated by the shallow drifting sand of the French materialism in the last century, that we might not have got our heads free again for who knows how long. As for the human race as a whole, so also for the individual. So long as it keeps free from sickly and rank outgrowths, mysticism is of inestimable worth. [...] Genuine mysticism is then something deeply founded in the inmost essence of man, in itself healthy, if also easily inclining to morbid growths, and of high value both for the individual and for humanity at large.

All founders of religion, and prophets, have declared that they have either received their wisdom personally from God, or, in composing their works, delivering their speeches, and doing their wonders, have been inspired by the Divine Spirit, which most of the higher religions have made an article of faith.

Email ThisBlogThis!Share to TwitterShare to FacebookShare to Pinterest
Labels: Hartmann