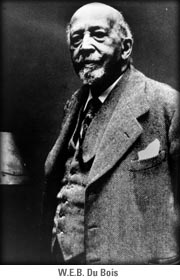 How does it feel to be a problem?


[B]eing a problem is a strange experience,- peculiar even for one who has never been anything else, save perhaps in babyhood and in Europe.

[I]t dawned upon me with a certain suddenness that I was different from the others; or like, mayhap [perhaps], in heart and life and longing, but shut out from their world by a vast veil. I had thereafter no desire to tear down that veil, or creep through; I held all beyond it in common contempt, and lived above it in a region of blue sky and great wandering shadows. [...] Alas, with the years all this fine contempt began to fade... . With other black boys the strife was not so fiercely sunny: their youth shrunk into... silent hatred of the pale world about them and mocking distrust of everything white; or wasted itself in a bitter cry, Why did God make me an outcast and a stranger in mine own house? The shades of the prison-house closed round about us all: walls straight and stubborn to the whitest, but relentlessly narrow, tall, and unscalable to sons of night who must plod darkly on in resignation, or beat unavailing palms against the stone, or steadily, half hopelessly, watch the streak of blue above.
[T]he Negro is... born with a veil, and gifted with second-sight in this American world,- a world which yields him no true self-consciousness, but only lets him see himself through the revelation of the other world. It is a peculiar sensation, this double-consciousness, this sense of always looking at one's self through the eyes of others, of measuring one's soul by the tape of a world that looks on in amused contempt and pity. One ever feels his twoness,- an American, a Negro; two souls, two thoughts, two unreconciled strivings; two waring ideals in one dark body, whose dogged strength alone keeps it from being torn assunder.
The history of the American Negro is the history of this strife,- this longing to attain self-conscious manhood, to merge his double self into a better and truer self.