'Theses on the Philosophy of History' by Walter Benjamin (1940)


A selection from Walter Benjamin's Theses on the Philosophy of History, 1940.

A Klee painting named Angelus Novus [editors note: see below] shows an angel looking as though he is about to move away from something he is fixedly contemplating. His eyes are staring, his mouth is open, his wings are spread. This is how one pictures the angel of history. His face is turned toward the past. Where we perceive a chain of events, he sees one single catastrophe which keeps piling wreckage upon wreckage and hurls it in front of his feet. The angel would like to stay, awaken the dead, and make whole what has been smashed. But a storm is blowing from Paradise; it has got caught in his wings with such violence that the angel can no longer close them. The storm irresistibly propels him into the future to which his back is turned, while the pile of debris before him grows skyward. This storm is what we call progress. 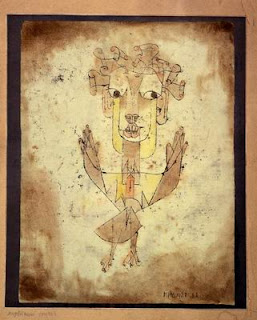 [Editors note: alt trans: There is a painting by Klee called Angelus Novus. An angel is depicted there who looks as though he were about to distance himself from something which he is staring at. His eyes are opened wide, his mouth stands open and his wings are outstretched. The Angel of History must look just so. His face is turned towards the past. Where we see the appearance of a chain of events, he sees one single catastrophe, which unceasingly piles rubble on top of rubble and hurls it before his feet. He would like to pause for a moment so fair [verweilen: a reference to Goethe’s Faust], to awaken the dead and to piece together what has been smashed. But a storm is blowing from Paradise, it has caught itself up in his wings and is so strong that the Angel can no longer close them. The storm drives him irresistibly into the future, to which his back is turned, while the rubble-heap before him grows sky-high. That which we call progress, is this storm.]

We need history, but we need it differently from the spoiled lazy-bones in the garden of knowledge.

– Nietzsche, On the Use and Abuse of History for Life

The subject of historical cognition is the battling, oppressed class itself. In Marx it steps forwards as the final enslaved and avenging class, which carries out the work of emancipation in the name of generations of downtrodden to its conclusion. This consciousness, which for a short time made itself felt in the “Spartacus” [Spartacist splinter group, the forerunner to the German Communist Party], was objectionable to social democracy from the very beginning. In the course of three decades it succeeded in almost completely erasing the name of Blanqui, whose distant thunder [Erzklang] had made the preceding century tremble. It contented itself with assigning the working-class the role of the savior of future generations. It thereby severed the sinews of its greatest power. Through this schooling the class forgot its hate as much as its spirit of sacrifice. For both nourish themselves on the picture of enslaved forebears, not on the ideal of the emancipated heirs.

Social democratic theory, and still more the praxis, was determined by a concept of progress which did not hold to reality, but had a dogmatic claim. Progress, as it was painted in the minds of the social democrats, was once upon a time the progress of humanity itself (not only that of its abilities and knowledges). It was, secondly, something unending (something corresponding to an endless perfectibility of humanity). It counted, thirdly, as something essentially unstoppable (as something self-activating, pursuing a straight or spiral path). Each of these predicates is controversial, and critique could be applied to each of them. This latter must, however, when push comes to shove, go behind all these predicates and direct itself at what they all have in common. The concept of the progress of the human race in history is not to be separated from the concept of its progression through a homogenous and empty time. The critique of the concept of this progress must ground the basis of its critique on the concept of progress itself.

Origin is the goal [Ziel: terminus].
– Karl Kraus, Worte in Versen I [Words in Verse]

History is the object of a construction whose place is formed not in homogenous and empty time, but in that which is fulfilled by the here-and-now [Jetztzeit].
The consciousness of exploding the continuum of history is peculiar to the revolutionary classes in the moment of their action. The Great Revolution introduced a new calendar. The day on which the calendar started functioned as a historical time-lapse camera. And it is fundamentally the same day which, in the shape of holidays and memorials, always returns. The calendar does not therefore count time like clocks.

Surely the time of the soothsayers, who divined what lay hidden in the lap of the future, was experienced neither as homogenous nor as empty. Whoever keeps this in mind will perhaps have an idea of how past time was experienced as remembrance: namely, just the same way. It is well-known that the Jews were forbidden to look into the future. The Torah and the prayers instructed them, by contrast, in remembrance. This disenchanted those who fell prey to the future, who sought advice from the soothsayers. For that reason the future did not, however, turn into a homogenous and empty time for the Jews. For in it every second was the narrow gate, through which the Messiah could enter.