'Studies on Hysteria' by Sigmund Freud and Josef Breuer (1895)


A selection from Studies on Hysteria by Sigmund Freud and Josef Breuer, 1895. The case study of 'Anna O' at the heart of Studies in Hysteria provided the paradigm of psychoanalysis. 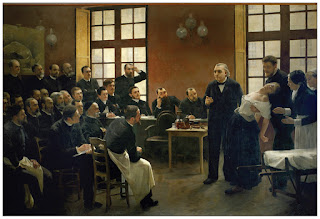 At the time of her falling ill (in 1880) Fraulein Anna O. was twenty-one years old. [...] She was markedly intelligent, with an astonishingly quick grasp of things and penetrating intuition. She possessed a powerful intellect which would have been capable of digesting solid mental pabulum and which stood in need of it- though without receiving it after she had left school. She had great poetic and imaginative gifts, which were under the control of a sharp and critical common sense. Owing to this latter quality she was completely unsuggestible; she was only influenced by arguments, never by mere assertions. Her will-power was energetic, tenacious and persistent; sometimes it reached the pitch of an obstinancy which only gave way out of kindness and regard for other people.

This girl, who was bubbling over with intellectual vitality, led an extremely monotonous existence in her puritanically-minded family. She embellished her life in a manner which probably influenced her decisively in the direction of her illness, by indulging in systematic day-dreaming, which she described as her 'private theatre'. [...] ...this habitual day-dreaming while she was well passed over into illness without a break.


...I at once recognized the seriousness of the psychical disturbance with which I had to deal. Two entirely distinct states of consciousness were present which alternated very frequently and without warning and which became more and more differentiated in the course of the illness. In one of these states she recognized her surroundings; she was melancholy and anxious, but relatively normal. In the other state she hallucinated and was 'naughty'- that is to say, she was abusive, used to throw the cushions at people, ...tore buttons off her bed-clothes and linen..., and so on. At this stage of her illness... if someone had entered or left the room [during her other state of consciousness] she would complain of having 'lost' some time and would remark upon the gap in her train of conscious thoughts. Since those about her tried to deny this and to soothe her when she complained that she was going mad, she would, after throwing the pillows about, accuse people of doing things to her and leaving her in a muddle, etc.,


There were extremely rapid changes of mood leading to excessive but quite temporary high spirits, and at other times severe anxiety, stubborn opposition to every therapeutic effort and frightening hallucinations of black snakes, which was how she saw her hair, ribbons and similar things. At the same time she kept telling herself not to be so silly: what she was seeing was really only her hair, etc. At moments when her mind was quite clear she would complain of the profound darkness in her head, of not being able to think, of becoming blind and deaf, of having two selves, a real one and an evil one which forced her to behave badly, and so on.
Throughout the entire illness her two states of consciousness persisted side by side: the primary one in which she was quite normal psychically, and the secondary one which may well be likened to a dream in view of its wealth of imaginative products and hallucinations, its large gaps of memory and the lack of inhibition and control in its associations. In this secondary state the patient was in a condition of alienation. [...] It is hard to avoid expressing the situation by saying that the patient was split into two personalities of which one was mentally normal and the other insane.


I had a very strong impression that the numerous products of her secondary state which had been quiescent were now forcing their way into consciousness; and though in the first instance they were being remembered only in her secondary state, they were nevertheless burdening and disturbing her normal one.

..how do these phenomena come about? What is their 'psychical mechanism'?

Our first case history, that of Anno O., to which I am obliged to keep on returning, affords a clear insight into what happens. The girl was in the habit, while she was in perfect health, of allowing trains of imaginative ideas to pass through her mind during her ordinary occupations. While she was in a situation that favoured auto-hypnosis, the affect of anxiety entered into her reverie and created a hypnoid state for which she had amnesia. This was repeated on different occasions and its ideational content gradually became richer and richer; but it continued to alternate with states of completely normal waking thought. After four months the hypnoid state gained entire control of the patient. [...] ...even during her normal behaviour the ideational complex belonging to the hypnoid state, the 'subconsciousness', was in existence and.. the split in her mind persisted.

...the splitting of the mind can also be caused by 'defence', by the deliberate deflection of consciousness from distressing ideas... .

It is true that 'unconscious ideas' never, or only rarely and with difficulty, enter waking thought; but they influence it. They do so, first, through their consequences- when, for instance, a patient is tormented by a hallucination which is totally unintelligible and senseless, but whose meaning and motivation become clear under hypnosis. Further, they influence association by making certain ideas more vivid than they would have been if they had not been thus reinforced from the unconscious. So particular groups of ideas constantly force themselves on the patient with a certain amount of compulsion and he is obliged to think of them.
(6) Innate Disposition

... I cannot accept Janet's view that the disposition to hysteria is based on innate psychical weakness. The medical practitioner who... observes the members of hysterical families at all ages will certainly be inclined to regard this disposition as lying in an excess rather than in a defect. Adolescents who are later to become hysterical are for the most part lively, gifted and full of intellectual interest before they fall ill. [...] ... it is rare to find in them simple, dull intellectual inertia and stupidity. The overflowing productivity of their minds has led one of my friends to assert that hysterics are the flower of mankind, as sterile, no doubt, but as beautiful as double flowers.