'Being and Nothingness' by Jean-Paul Sartre (1943) 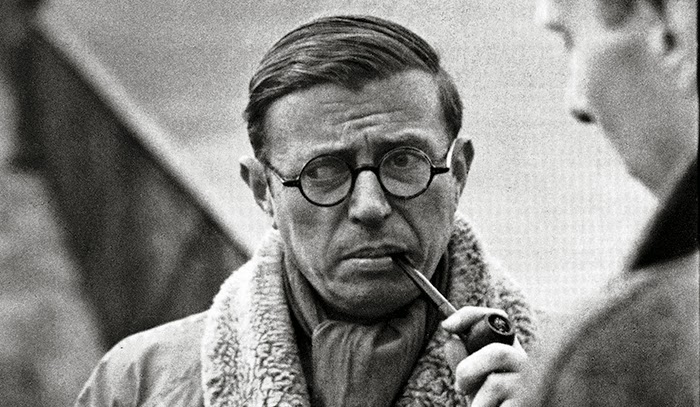 A selection from Jean-Paul Sartre's Being and Nothingness: An Essay on Phenomenological Ontology, 1943.

Without going outside our attitude of reflective description, we can encounter modes of consciousness which seem, even while themselves remaining strictly in for-itself, to point to a radically different type of ontological structure. This ontological structure is mine; it is in relation to myself as subject that I am concerned about myself, and yet this concern (for-myself) reveals to me a being which is my being without being-for-me.
Consider for example shame. [...] It is a non-positional self-consciousness, conscious (of) itself as shame... . ... it is a shameful apprehension of something and this something is me. I am ashamed of what I am. Shame therefore realizes an intimate relation of myself to myself. [...] ...it is in its primary structure shame before somebody. I have just made an awkward or vulgar gesture. This gesture clings to me; I neither judge it nor blame it. I simply live it. I realize it in the mode of for-itself. But now suddenly I raise my head. Somebody was there and has seen me. Suddenly I realize the vulgarity of my gesture, and I am ashamed. [...] ...the Other is the indispensable mediator between myself and me. I am ashamed of myself as I appear to the Other.
By the mere appearance of the Other, I am put in the position of passing judgement on myself as an object, for it is as an object that I appear to the Other. Yet this object which has appeared to the Other is not an empty image in the mind of another. [...] Shame is by nature recognition. I recognize that I am as the Other sees me.

Shame is an immediate shudder which runs through me from head to foot... .

Thus shame is shame of oneself before the Other; these two structures are inseparable. But at the same time I need the Other in order to realize fully all the structures of my being.

II. The Reef of Solipsism


...the Kantians... preoccupied [themselves] with establishing the universal laws of subjectivity which are the same for all. [...] Kant adopted the point of view of the pure subject in order to determine the conditions of possibility not only for an object in general but for the various categories of objects. [...] In this connection Kant has been criticized for lacunas in hiw work, and some-- following Dilthey, for example-- have wished to establish the conditions of possibility for the historical object-- i.e., to attempt a critique of historical reason.


It is this unpredictability which Kafka's art attempts to describe in The Trial and The Castle. ...Without doubt Kafka is trying here to express the transcendence of the divine; it is for the divine that the human act is constituted in truth. But god here is only the concept of the Other pushed to the limit. ... That gloomy, evanescent atmosphere of The Trial ... is nothing but the description of our being in the world for others.


As a temporal-spatial object in the world I offer myself to the Other's appraisal. ...To be looked at is to apprehend oneself as the unknown object of unknowable appraisals- in particular, of value judgements. ... A judgement is the transcendental act of a free being. Thus being -seen constitutes me as a defenseless being for a freedom which is not my freedom. It is in this sense that we can consider ourselves as 'slaves' in so far as we appear to the Other. ... I am a slave to the degree that my being is dependent at the center of a freedom which is not mine and which is the very condition of my being. ...in so far as I am the instrument of possibilities which are not my possibilities, whose pure presence beyond my being I can not even glimpse, and which deny my transcendence in order to constitute me as a means to ends of which I am ignorant - I am in danger. This danger is not an accident but the permanent structure of my being for others.

...if we happen to appear 'in public' to act in a play or to give a lecture, we never lose sight of the fact that we are looked at, and we execute the ensemble of acts which we have come to perform in the presence of the look; better yet we attempt to constitute a being and an ensemble of objects for this look.

Note: not sure where the following excerpts stand in relation to above:

The Other "is the test of my being inasmuch as he throws me outside of myself toward structures which at once both escape me and define me."

"The appearance of the Other in the world corresponds therefore to a fixed sliding of the whole universe, to a decentralization of the world which undermines the centralization which I am simultaneously effecting."

"...it appears that the world has a kind of drain hole in the middle of its being and that it is perpetualy flowing off through this hole."


"My original fall is the existence of the Other."

"My being for others is a fall through absolute emptiness toward objectivity. ... Thus myself-as-object is neither knowledge nor a unity of knowledge but an uneasiness, a lived wrenching away from the ecstatic unity of the Foritself, a limit which I cannot reach and which yet I am."

"Shame is the feeling of an original fall, not because of the fact that I may have committed this or that particular fault but simply that I have 'fallen' into the world in the midst of things and that I need the mediation of the Other in order to be what I am."