'On Heroes and Hero Worship and the Heroic in History' by Thomas Carlyle (1840?)

Science has done much for us; but it is a poor science that would hide from us the great deep sacred infinitude of Nescience, whither we can never penetrate, on which all science swims as a mere superficial film. This world, after all our science and sciences, is still a miracle; wonderful, inscrutable, magical and more, to whosoever will think of it.
That great mystery of TIME, were there no other: the illimitable, silent, never-resting thing called Time, rolling, rushing on, swift, silent, like an all-embracing ocean-tide, on which we and all the Universe swim like exhalations, like apparitions which are, and then are not: this is forever very literally a miracle; a thing to strike us dumb,- for we have no word to speak about it. This Universe, ah me- what could the wild man know of it; what can we yet know? That it is a Force, and thousandfold Complexity of Forces... ? [...] Nay surely, to the Atheistic Thinker... it must be a miracle too, this huge illimitable whirlwind of Force, which envelopes us here; never-resting whirlwind, high as Immensity, old as Eternity. What is it? God's creation, the religious people answer; it is the Almighty God's! Atheistic science babbles porrly of it, iwth scientific nomenclatures, experiements and what-nots, as if it were a poor dead thing, to be bottle up in Leyden jars... : but the natural sense of man, in all times, if he will honestly apply his sense, proclaims it to be a living thing;... towards which the best attitude for us, after never so much science, is awe, devout prostration and humility of soul; worship if not in words, then in silence.
What in such a time as ours it requires a Prophet or Poet to teach us, namely, the stripping-off of those poor undevout wrappages, nomenclatures and scientific hearsays,- this, the ancient earnest soul, as yet unencumbered with these things, did for itself. The world, which is now divine only to the gifted, was then divine to whosoever would turn his eye upon it. He stood bare before it face to face.
Poet and Prophet differ greatly in our... modern notions of them. In some old languages... the titles are synonymous; Vates means both Prophet and Poet: and indeed at all times, Prophet and Poet, well understood, have much kindred of meaning. Fundamentally indeed they are still the same; in this most important respect especially, That they have penetrated both of them into the sacred mystery of the Universe; what Goethe calls 'the open secret.' 'Which is the great secret?' asks one.-'The open secret,'- open to all, seen by almost none! That divine mystery, which lies everywhere in all Beings, 'the Divine Idea of the World, that which lies at the bottom of Appearance,' as Fichte styles it; of which all Appearance,... is but the vesture, the embodiment that renders it visible. This divine mystery is in all times and in all places; veritably is. In most times and places it is greatly overlooked; and the Universe, definable always... as the realised Thought of God, is considered a trivial, inert, commonplace matter,- as if, says the Satirist, it were a dead thing, which some upholsterer had put together!


A vein of Poetry exists in the hearts of all men... .
...you will say, there must be a difference between true Poetry and true Speech not poetical: what is the difference? [...] If your delineation be authentically musical, musical, not in word only, but in heart and substance, in all the thoughts and utterances of it, in the whole conception of it, then it will be poetical... . A musical thought is one spoken by a mind that has penetrated into the inmost heart of the thing; detected the inmost mystery of it, namely the melody that lies hidden in it... .All inmost things, we may say, are melodious; naturally utter themselves in Song.
All deep things are Song. It seems somehow the very central essence of us, Song; as if all the rest were but wrappages and hulls! The primal element of us; of us, and of all things. The Greeks fabled of Sphere-Harmonies; it was the feeling they had of the inner structure of Nature; that the soul of all her voices and utterances was perfect music. [...] It is a mans sincerity and depth of vision that makes him a Poet. See deep enough, and you see musically; the heart of Nature being everywhere music, if you can only reach it. 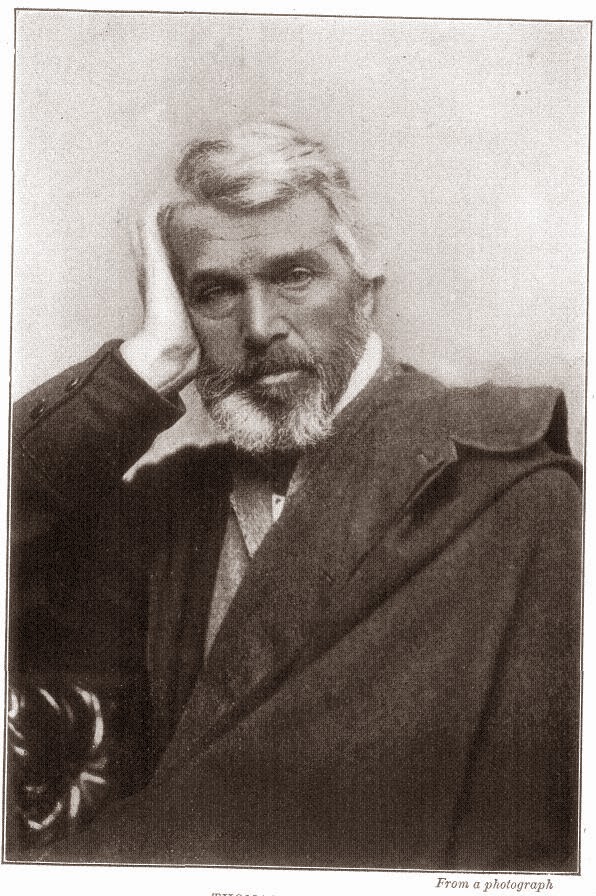 As introductory to the whole, a remark about Idolatry will perhaps be in place here. One of Mahomet's characteristics, which indeed belongs to all Prophets, is unlimited implacable zeal against Idolatry. It is the grand theme of Prophets: Idolatry, the worshipping of dead Idols as the Divinity, is a thing they cannot away with, but have to denounce continually, and brand with inexpiable reprobation; it is the chief of all the sins they see done under the sun. This is worth noting. We will not enter here into the theological question about Idolatry. Idol is Eidolon, a thing seen, a symbol. It is not God, but a Symbol of God; and perhaps one may question whether any the most benighted mortal ever took it for more than a Symbol. I fancy, he did not think that the poor image his own hands had made was God; but that God was emblemed by it, that God was in it some way or other. And now in this sense, one may ask, Is not all worship whatsoever a worship by Symbols, by eidola, or things seen? Whether seen, rendered visible as an image or picture to the bodily eye; or visible only to the inward eye, to the imagination, to the intellect: this makes a superficial, but no substantial difference. It is still a Thing Seen, significant of Godhead; an Idol. The most rigorous Puritan has his Confession of Faith, and intellectual Representation of Divine things, and worships thereby; thereby is worship first made possible for him. All creeds, liturgies, religious forms, conceptions that fitly invest religious feelings, are in this sense eidola, things seen. All worship whatsoever must proceed by Symbols, by Idols:--we may say, all Idolatry is comparative, and the worst Idolatry is only more idolatrous.