'Maurice Blanchot: The Thought from Outside' by Michel Foucault (1966) 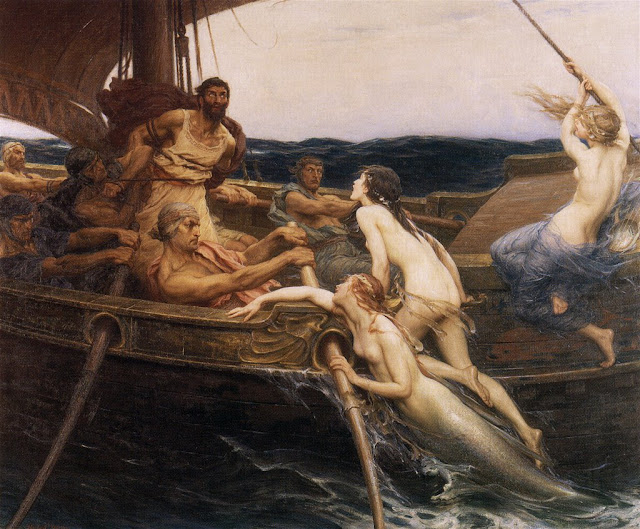 
See also Death and the Labyrinth: The World of Raymond Roussel by Michel Foucault, 1963

Eurydice and the Sirens

The sirens are the elusive and forbidden form of the alluring voice. They are nothing but song. Only a silvery wake in the sea, the hollow of a wave, a cave in the rocks, the whiteness of the beach- what are they in their very being if not a pure appeal, if not the mirthful void of listening, if not attentiveness, if not an invitation to pause? [...] Only the promise of a future song accompanies their melody. What makes them seductive is less what they make it possible to hear than what sparkles in the remoteness of their words, the future of what they say. Their fascination is due not to their current song, but to what it promises to be. What the Sirens promise to sing to Ulysses is his own past exploits, transformed into a poem for the future... . [...] A promise at once deceptive and truthful. It lies because all those who surrender to seduction and steer their ships toward the beach will only meet death. But it speaks the truth in that it is death that enables the song to sound and endlessly to recount the heroes adventure. Yet one must refuse to hear this song so pure- so pure that it says nothing more than its own devouring withdrawal- that one must plug one's ears, pass by it as if one were deaf, in order to live and thus begin to sing. Or, rather, in order for the narrative that will never die to be born, one must listen but remain at the mast, wrists and ankles tied; one must vanquish all desire by a trick that does violence to itself; one must experience all suffering by remaining at the threshold of the alluring abyss; one must finally find oneself beyond song, as if one had crossed death while still alive only to restore it in a second language.
Then there is the figure of Eurydice. She would seem to be the exact opposite, since she must be summoned back from the shadows by the melody of a song capable of seducing and lulling death, and since the hero is unable to resist Eurydice's power of enchantment, of which she herself is the saddest victim. Yet she is a close relative of the Sirens: just as they only sing the future of a song, she only shows the promise of a face. Orpheus may have succeeded in quieting barking dogs and out maneuvering sinsister forces, but on the return trip he should have been chained like Ulysses or as unperceiving as his sailors; in fact, he was the hero and his crew combined in a single character: he was seized by the forbidden desire and untied himself with his own hands, letting the invisible face disappear into the shadows, just as Ulysses let the song he did not hear vanish in the waves. Each of their voices is then freed: Ulysses' with his salvation and the possibility of telling the tale of his marvellous adventure; Orpheus's with his absolute loss and never-ending lament. But it is possible that behind Ulysses' triumphant narrative there prevails the inaudible lament of not having listened better and longer, of not having ventured as close as possible to the wondrous voice that might have finished the song. And that behind Orpheus's laments shines the glory of having seen, however fleetingly, the unattainable face at the very instant it turned away and returned to darkness: a nameless, placeless hymn to the light.
These two figures are profoundly interwoven... . [T]he gaze of Orpheus... at the wavering threshold of death goes in search of the submerged presence and tries to bring its image back to the light of day, but only secures the nothingness in which the poem can subsequently appear. [...] The gaze of Orpheus acquires the fatal power that sang in the voice of the Sirens.


...who has always remained hidden but makes it patently obvious that he is there; a double that keeps his distance, an accosting resemblance. [...] When one thought that one was being drawn out of oneself by an inaccessible remoteness, was it not simply that this mute presence was bearing down in the shadows with all its inevitable weight? ...it presents itself as ...a redundant presence, as one figure too many; ...one must keep it at a distance, because there is always the danger that one will be absorbed by it and compromised by it in boundless confusion. This means that the companion acts both as a demand to which one is never equal and a weight of which one would like to rid oneself... a heavy mass, an encumbering inertia, a slumber threatening to engulf all vigilance.

Neither one nor the Other.

The characteristic movement of mysticism is to attempt to join- even if it means crossing the night- the positivity of an existence by opening a difficult line of communication with it. Even when that existence contests itself, hollows itself out in the labour of its own negativity, infinitely withdrawing into a lightless day, a shadowless night, a visibility devoid of shape, it is still a shelter in whcih experience can rest. The shelter is created as much by the law of a Word as by the open expanse of silence. For in the form of the experience, silence is the immeasurable, inaudible, primal breath from which all manifest discourse issues; or, speech is a reign with the power to hold itself in silent suspense.
The experience of the outside has nothing to do with that. The movement of attraction and the withdrawal of the companion lay bare what precedes all speech, what underlies all silence: the continuous streaming of language. A language spoken by no one: any subject it may have is no more than a grammatical fold. A language not resolved by any silence: any interruption is only a white stain on its seamless sheet. It opens a neutral space in which no existence can take root. ...the being of language is the visible effacement of the one who speaks: "Saying that I hear these words would not explain for me the dangerous strangeness of my relations with them... . They do not speak, they are not inside; on the contrary, they lack all intimacy and lie entirely outside. What they designate consigns me to this outside of all speech, seemingly more secret and more inward than the inner voice of conscience. But that outside is empty, the secret has no depth, what is repeated is the emptiness of repitition, it does not speak and yet has always been said." [Maurice Blanchot, Celui qui ne m'accompagnait pas, pp. 136-137] The experiences Blanchot narrates lead to this anonymity of language liberated and opened to its own boundlessness. What they find in that murmuring space is less an end point than the site without geography of their possible rebeginning... .

Language is then freed from all of the old myths by which our awareness of words, discourse, and literature has been shaped. For a long time it was thought that language had mastery over time, that it acted both as the future bond of the promise and as memory and narrative; it was thought to be prophecy and history; it was also thought that in its sovereignty it could bring to light the eternal and visible body of truth; it was thought that its essence resided in the form of words or in the breath that made them vibrate.
Orpheus's murderous forgetting, Ulysses' wait in chains, are the very being of language.