'The Praise of Folly' by Desiderius Erasmus (1509)


A Selection from The Praise of Folly by Desiderius Erasmus, 1509. Note, see the Appendix [forthcoming], for the Letter to Martin Dorp, 1515.


From Johan Huizinga's Erasmus and the Age of Reformation (1924):


Throughout the work two themes are intertwined: that of salutary folly, which is true wisdom, and that of deluded wisdom, which is pure folly. As they are both put into the mouth of Folly, we should have to invert them both to get truth, if Folly... were not wisdom. Now it is clear that the first is the principal theme. Erasmus starts from it; and he returns to it. Only in the middle, as he reviews human accomplishments and dignities in their universal foolishness, the second theme predominates and the book becomes an ordinary satire on human folly, of which there are many though few are so delicate. [...] Occasionally the satire runs somewhat off the line, when Stultitia directly censures what Erasmus wishes to censure... 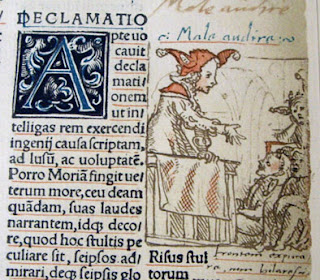 FOLLY SPEAKS: Whatever is generally said of me by mortal men, and I'm quite well aware that Folly is in poor repute even amongst the greatest fools, still, I am the one- and indeed, the only one- whose divine powers can gladden the hearts of gods and men. Proof enough of this is the fact that as soon as I stepped forward to address this crowded assembly, every face immediately brightened up with a new, unwonted gaiety and all your frowns were smoothed away. You laughed and applauded with such delightfully happy smiles that as I look at you all gathered round me I could well believe you are tipsy with nectar like the Homeric gods, with a dash of nepenthe too to drive away your cares, though a moment ago you were sitting looking as gloomy and harassed as if you had just come up from Trophonius's cave. [...] ...great orators must as a rule spend time preparing long speeches and even then find it difficult to succeed in banishing care and trouble from your minds, but I've done this at once- and simply by my looks.

Why have I appeared today in this unaccustomed garb? Well, you shall hear the reason if you have no objection to lending me your ears- no, not the ones you use for preachers or sermons, but the ears you usually prick up for mountebanks, clowns and fools... . I've a fancy to play the Sophist before you, and I don't mean by that one of the tribe today who cram tiresome trivialities into the heads of schoolboys and teach them a more than feminine obstinancy in disputation- no, I shall follow the ancients who chose the name Sophist in preference to the damaging title of philosopher or lover of wisdom. Their concern was to provide eulogies in praise of gods and heroes, so it's a eulogy you are going to hear now, though not one of Hercules or Solon. It's in praise of myself, namely, FOLLY.

Now, I don't think much of those wiseacres who maintain it's the height of folly and conceit if anyone speaks in his own praise; or rather, it can be as foolish as they like, as long as they admit it's in character. What could be more fitting than for Folly to trumpet her own merits abroad and 'sing her own praises' [translation of a greek quote, also rendered as 'blow her own horn']? Who could portray me better than I can myself? Unless, of course, someone knows me better than I know myself. [...] I follow that wellworn popular proverb which says that a man does right to praise himself if he can't find any one to praise him.


...I've always like best to say 'whatever was on the tip of my tongue'. None of you need expect me to follow the usual practice of ordinary rhetoricians and explain myself by definition, still less by division. It wouldn't bode well for the future either to limit and confine one whose divinity extends so far, or to cut her up when the whole world is united in worshipping her.

I've no use for cosmetics, my face doesn't pretend to be anything different from my innermost feelings. I am myself wherever I am, and no one can pretend I'm not- especially those who lay special claim to be called the personification of Wisdom, even though they strut about like 'apes in purple and asses in lion-skins' [note: see editors note]. [...] There's an ungrateful lot of folk for you- members of my party if anyone is, and yet so ashamed of my name in public that they cast it freely at others as a term of strong abuse.

...suppose someone could look down on the life of a man from a great height, as the poets say Jove does, how many disasters would he see in store for it!


In fact, could one make observations from the moon, as did Menippus, considering the numberless agitations of the Earth, one would think one saw a swarm of flies or gnats fighting among themselves.


They abound in so many forms of folly and devise so many new ones every day that a thousand Democrituses wouldn't be enough to laugh at them, and we'd always have to call in one Democritus more. Its hardly believable how much laughter, sport and fun you poor mortals can provide the gods every day. ..they settle down on some promontory of heaven and lean over to watch the goings-on of mankind, a show they enjoy more than anything. Heavens, what a farce it is, what a motley crowd of fools!


...self-love ..enables [fools] to dwell in a sort of third heaven, looking down from aloft, almost with pity, on all the rest of mankind as so many cattle crawling on the face of the earth.


If anyone tries to take the masks of the actors when they're playing a scene on the stage and show their true natural faces to the audience, he'll certainly spoil the whole play and deserve to be stoned and thrown out of the theatre for a maniac. For a new situation will suddenly arise in which a woman on the stage turns into a man, a youth is now old, and the king of a moment ago is suddenly Dama, the slave, while a god is shown up as a common little man. To destroy the illusion is to ruin the whole play, for its really the illusion and make-up which hold the audiences eye. Now, what else is the whole life of man but a sort of play? Actors come on wearing their different masks and all play their parts until the producer orders them off the stage, and he can often tell the same man to appear in different costume, so that now he plays a king in purple and now a humble slave in rags. Its all a sort of pretense, but its the only way to act out this farce.


The happiness which Christians seek with so many labours is nothing other than a certain kind of madness and folly. Dont be put off by the words, but consider the reality. In the first place, CHristians come very near to agreeing with the Platonists that the soul is stifled and bound down by the fetters of the body which by its gross matter prevents the soul from being able to contemplate and enjoy things as they truly are. Next, Plato defines philosophy as a preparation for death because it leads the mind from visible and bodily things, just as death does. And so as long as the mind makes proper use of the organs of the body it is called sane and healthy, but once it begins to break its bonds and tries to win freedom, as if it were planinmg an escape from prison, men call it insane. If this happens through disease or some organic defect, by general consent it is called insanity. Even so, we see this type of person foretelling the future, showing a knowledge of languages and literature they had never previously learned, and giving clear indication of something divine. Undoubtedly this happens because the mind is beginning to free itself from contamination by the body and exercise its true natural power. I think this also explains why those who are struggling at the hour of death often experience something similar, so that they speak wonders as if inspired.


And so we have a situation which I think is not unlike that in the myth in Plato, where those who were chained in a cave marvelled at shodows, whereas the man who had escaped and then returned to teh cavern told them that he had seen real things and they were much mistaken in their belief that nothing existed but their wereched shadows. This man who has gained understanding pities his companions and deplores their insanity which confines them to such an illusion, but they in their turn laugh at him as if he were crazy and turn him out.


...though all the senses have some kinship with the body, some of them are grosser, such as touch,m hearing, sight, smell and taste, which other faculties are less physical, for instance, memory, intellect and will.


Since... all the power of the pious soul is directed towards what is furthest removed from the grosser senses, these become blunted and benumbed. The vulgar crowd of course does the opposite, develops them very much and more spiritual faculties very little.

Some have more traffic with the grossness of the body, such as lust, desire for food and sleep, anger, pride and envy, and on these the pious wage unceasing war. ...sublimate them to the highest region of the soul. They wish to love their father not as a father, for he begot nothing but the body, and this too is owed to God the father, but as ....one in whom is reflected the image of the supreme mind which alone they call the summum bonum [the highest good] and beyond which they declare nothing is to be loved or sought.