Medieval Historiography: 'History of the Two Cities' by Otto of Freising (1145)


The following excerpts are taken from Otto of Freising's 'Chronica sive Historia de duabus civitatibus' (Chronicle or history of the two cities), which was written during the civil war in Germany (1143–1145). This work of history is conceived after the pattern laid down by Augustine:


"I thought it necessary.... to compose a history whereby, through God's favour, I might display the miseries of the citizens of Babylon and also the glory of the kingdom of Christ to which the citizens of Jerusalem are to look forward with hope... . I have undertaken therefore to bring down as far as our own time... the record of the conflict and miseries of the one city, Babylon; and furthermore, not to be silent concerning our hopes regarding that other city... but to make mention also of its citizens who are now sojourning in the worldly city."

(Note: see also Augustine on the two cities in his the City of God against the Pagans, and my post 'The Mythology of European History'.)


In pondering long and often in my heart upon the changes and vicissitudes of temporal affairs and their varied and irregular issues, even as I hold that a wise man ought by no means to cleave to the things of time, so I find that it is by the faculty of reason alone that one must escape and find release from them. For it is the part of a wise man not to be whirled about after the manner of a revolving wheel, but through the stability of his powers to be firmly fashioned as a thing foursquare. Accordingly, since things are changeable and can never be at rest, what man in his right mind will deny that the wise man ought, as I have said, to depart from them to that city which stays at rest and abides to all eternity? This is the City of God, the heavenly Jeruslaem, for which the children of God sigh while they are set in this land of sojourn, oppressed by the turmoil of the things of time as if they were oppressed by the Babylonian captivity. For, inasmuch as there are two cities- the one of time, the other of eternity; the one of the earth, earthly, the other heaven, heavenly; the one of the devil, the other of Christ- eccelsiastical writers have declared that the former is Babylon, the latter Jerusalem.
But, whereas many of the Gentiles have written much regarding one of these cities, to hand down to posterity the great exploits of men of old (the many evidences of their merits, as they fancied), they have yet left to us the task of setting forth what, in the judgement of our writers, is rather the tale of human miseries... .
In those writings the discerning reader will be able to find not so much histories as pitiful tragedies made up of mortal woes. We believe that this has come to pass by what is surely a wise and proper dispensation of the Creator, in order that, whereas men in their folly desire to cleave to earthly and transitory things, they may be frightened away from them by their own vicissitudes, if by nothing else, so as to be directed by the wretchedness of this fleeting life from the creature to a knowledge of the Creator. But we, set down as it were at the end of time, do not so much read of the miseries of mortals in the books of the writers named above as find them for ourselves in consequence of the experiences of our own time. For, to pass over other things, the empire of the Romans, which in Daniel is compared to iron on account of its sole lordship- monarchy, the Greeks call it- over the whole world, a world subdued by war, has in consequence of so many fluctuations and changes, particularly in our day, become, instead of the noblest and the foremost, almost the last... .

The world's misery is exhibited, therefore, even in the case of the chief power in the world, and Rome's fall foreshadows the dissolution of the whole structure.

The careful student of history will find that learning was transferred from Egypt to the Greeks, then to the Romans, and finally to the Gauls and the Spaniards. And so it is to be observed that all human power or learning had its origin in the East, but is coming to an end in the West, that thereby the transitoriness and decay of all things human may be displayed. This, by God's grace, we shall show more fully in what follows.
Since, then, the changeable nature of the world is proved by this and like evidence, I thought it necessary.... to compose a history whereby, through God's favour, I might display the miseries of the citizens of Babylon and also the glory of the kingdom of Christ to which the citizens of Jerusalem are to look forward with hope, and of which they are to have a foretaste even in this life. I have undertaken therefore to bring down as far as our own time... the record of the conflict and miseries of the one city, Babylon; and furthermore, not to be silent concerning our hopes regarding that other city, so far as I can gather hints from the Scriptures, but to make mention also of its citizens who are now sojourning in the worldly city.

As we are about to speak, then, concerning the sorrow-burdoned insecurity of the one city and the blessed permanence of the other, let us call upon God, who endures with patience the turbulence and confusion of this world, and by the vision of Himself augments and glorifies the joyous peace of that other city, to the end that by His aid we may be able to say the things which are pleasing to Him... .

...when the Lord wished His city to spread abroad and to be extended from that people [the Jews] to all nations, He permitted the realm [Israel] to be weakened under pressure of the people's sins, and the people itself to be led into captivity. But among the nations which He was to summon to faith in Himself, He established the sovereignty of the Romans to rule over the rest. When this had reached its fullest development and the pinnacle of power, He willed that His Son Christ should appear in the flesh... . So then the Lord, transferring His city from that people to the Gentiles, willed that they should first be humbled, despised, and afflicted by many misfortunes- even as it is written, "He scourgeth every son whom He receiveth." But because scourgings, when they exceed due measure, break the spirit rather than heal it (as medicines taken to excess), at the proper time, as I have said before, He exalted His forsaken and humbled Church. That it might therefore become more tranquil with respect to the promised heavenly kingdom, He bestowed upon it the greatest temporal power possessed by any realm. And thus as I have said the City of God, increasing gradually, reached its pinnacle and undivided authority.


...enough has been said above, I think, regarding the two cities: how one made progress, first by remaining hidden in the other until the coming of Christ, after that by advancing gradually to the time of Constantine. But after Constantine, when the troubles from without had finally ceased, it began to be grievously troubled at the instigation of the devil by internal strife... .

I seem to myself to have composed a history not of two cities but virtually of one only, which I call the Church. For although the elect and the reprobate are in one household, yet I cannot call these cities two as I did above; I must call them properly but one- composite, however, as the grain is mixed with the chaff. Wherefore in the books that follow let us pursue the course of history which we have begun. Since not only emperors of the Romans but also other kings (kings of renowned realms) became Christians, inasmuch as the sound of the word of God went out into all the earth and unto the ends of the world, the City of Earth was laid to rest and destined to be utterly exterminated in the end; hence our history is a history of the City of Christ, but that city, so long as it is in the land of sojourn, is "like unto a net, that was cast into the sea," containing the good and the bad. However, the faithless city of unbelieving Jews and Gentiles still remains, but, since nobler kingdoms have been won by our people, while these unbelieving Jews and Gentiles are insignificant not only in the sight of God but even in that of the world, hardly anything done by these unbelievers is found to be worthy of record or to be handed on to posterity." 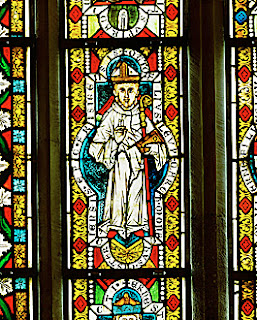