'Fantasia of the Library' by Michael Foucault (1964) 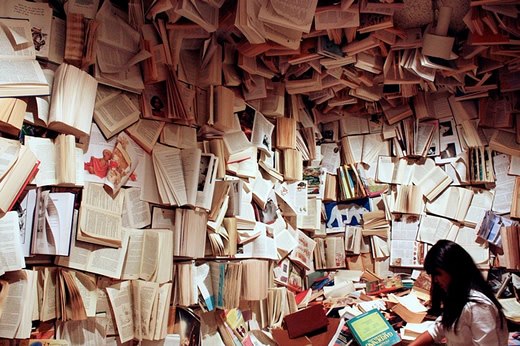 A selection from 'Fantasia of the Library' by Michel Foucault, 1964. 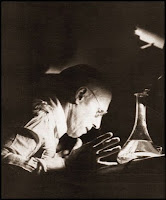 This domain of phantasms is no longer the night, the sleep of reason, or the uncertain void that stands before desire, but, on the contrary, wakefulness, untiring attention, zealous erudition, and constant vigilance. Henceforth, the visionary experience arises from the black and white surface of printed signs, from the closed and dusty volume that opens with a flight of forgotten words; fantasies are carefull deployed in the hushed library, with its columns of books, with its titles aligned on shelves to form a tight enclosure, but within confines that also liberate impossible worlds. The imaginary now resides between the book and the lamp. [...] Dreams are no longer summoned with closed eyes, but in reading; and a true image is now a product of learning: it derives from words spoken in the past, exact recensions, the amassing of minute facts, monuments reduced to infinitesimal fragments, and the reproductions of reproductions. In the modern experience, these elements contain the power of the impossible.' Only the assiduous clamor created by repetition can transmit to us what only happened once. The imaginary is not formed in opposition to reality as its denial or compensation; it grows among signs, from book to book, in the interstice of repetitions and commentaries; it is born and takes shape in the interval between books.' It is a phenomenon of the library.

The presence of the book in [Flaubert's] The Temptation [of St. Anthony], its manifestation and concealment, is indicated in a strange way: it immediately contradicts itself as a book. From the start, it challenges the priority of its printed signs and takes the form of a theatrical presentation: the transcription of a text that is not meant to be read, but recited and staged. At one time, Flaubert had wanted to transform The Temptation into a kind of epic drama, a Faust capable of swallowing the entire world of religion and gods. He soon gave up this idea but retained within the text the indications marking a possible performance: division into dialogues and scenes, descriptions of the place of action, the scenic elements, and their modifications, blocking directions for the 'actors' on stage- all given according to a traditional typographical arrangement(smaller type and wider margins for stage directions, a character's name in large letters above the speeches, etc.). IN a significant redoubling, the first indicated setting- the site of all future modifications0 has the form of a natural theater: the hermit's retreat has been placed 'at the top of a mountain, on a platform rounded in the form of a half-moon and enclosed by large boulders.' The text describes a stage which, itself, represents a 'platform' shaped by natural forces and upon which new scenes will in turn impose their sets. But these indications do not suggest a future performance (they are largely incompatible with an actual presentation); they simply designate the specific mode of existence of the text. Print can only be an unobtrusive aid to the visible; an insidious spectator takes the reader's place and the act of reading is dissolved in the triumph of another form of sight. The book disappears in the theatricality it creates.
But it will immediately reappear within a scenic space. No sooner have the first signs of temptation emerged from the gathering shadows, no sooner have the disquieting faces appeared in the night, than Saint Anthony lights a torch to protect himself and opens a 'large book.' This posture is consistent with the iconographic tradition:... the hermit... is kneeling before an immense volume, his head slightly bowed, and his eyes intent on the written lines. Surrounding him on all sides are naked women with open arms, lean Gluttony stretching her giraffe's neck, barrel-like men creating an uproar, and nameless beasts devouring each other. [...] But this assembly is lost on the saint, absorbed in his reading. He sees nothing of this great uproar, unless perhaps through the corner of his eye, unless he seeks to protect himself by invoking the enigmatic powers of a magician's book. It may be, on the contrary, that the mumbling recitation of written signs has summoned these poor shapeless figures that no language has ever named, that no book can contain, but that anonymously invade the weighty pages of the volume. It may be, as well, that these creatures of unnatural issue escaped from the book, from the gaps between the open pages or the blank spaces between the letters. More fertile than the sleep of reason, the book perhaps engenders an infinite brood of monsters. Far from being a protection, it has liberated an obscure swarm of creatures and created a suspicious shadow through the mingling of images and knowledge.

This book, which initially appears as a progression of slightly incoherent fantasies, can claim originality only with respect to its meticulous organization. What appears as fantasy is no more than the simple transcription of documents, the reproductions of drawings or texts, but their sequence conforms to an extremely complex composition. By assigning a specific location to each documentary element, it is also made to function within several simultaneous series. The linear and visible sequence of sins, heresies, divinities, and monsters is merely the superficial crest of an elaborate vertical structure. This succession of figures, crowded like puppets dancing the farandole, also functions as: a trinity of canonical virtues; the geodesic line of a culture born in the dreams of the Orient and completed in the knowledge of the West; the return of History to the origin of time and the beginning of things; a pulsating space that expands to the outer limits of the universe and suddenly recedes to return to the simplest element of life. Each element and each character has its place not only in the visible procession, but in the organization of Christian allegories, the development of culture and knowledge, the reverse chronology of the world, and the spatial configurations of the universe.

Each element (setting, character, speech, alteration of scenery) is effectively placed at a definite point in the linear sequence, but each element also has its vertical system of correspondences and is situated at a specific depth in the fiction. 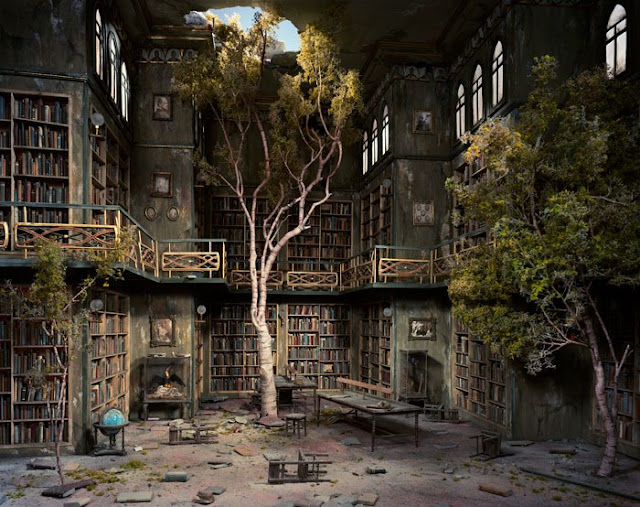