Jung's Vision, in the Similitude of a Dream, of the Unconscious Psyche as a Multi-story House 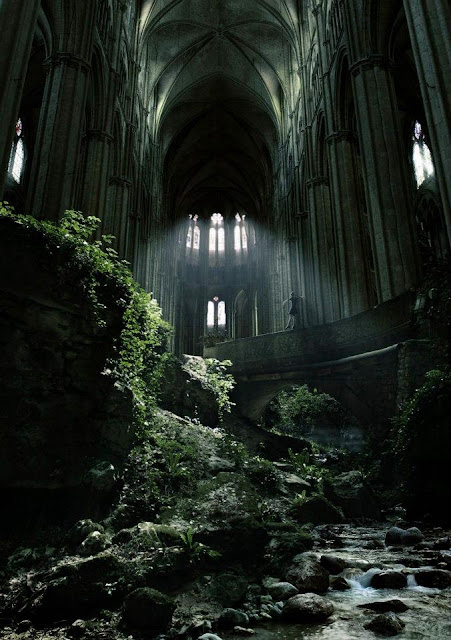 "Freud was able to interpret the dreams I was then [on their trip to the USA in 1909] having only incompletely or not at all. They were dreams with collective contents, containing, a great deal of symbolic material. One in particular was important to me, for it led me for the first time to the concept of the 'collective unconscious'... ."

"This was the dream. I was in a house I did not know, which had two stories. It was 'my house.' I found myself in the upper story, where there was a kind of salon furnished with fine old pieces in rococo style. On the walls hung a number of precious old paintings. I wondered that this should be my house, and thought, 'Not bad.' But then it occtured to me that I did not know what the lower floor looked like. Descending the stairs, I reached the ground floor. There everything was much older, and I realized that this part of the house must date from about the fifteenth or sixteenth century. The furnishings were medieval; the floors were of red brick. Everywhere it was rather dark. I went from one room to another, thinking, 'Now I really must explore the whole house.' I came upon a heavy door, and opened it. Beyond it, I discovered a stone stairway that led down into the cellar. Descending again, I found myself in a beautifully vaulted room which looked exceedingly ancient. Examining the walls, I discovered layers of brick among the ordinary stone blocks, and chips of brick in the mortar. As soon as I saw this I knew that the walls dated from Roman times. My interest by now was intense. I looked more closely at the floor. It was of stone slabs, and in one of these I discovered a ring. When I pulled it, the stone slab lifted, and again I saw a stairway of narrow stone steps leading down into the depths. These, too, I descended, and entered a low cave cut into the rock. Thick dust lay on the floor, and in the dust were scattered bones and broken pottery, like remains of a primitive culture. I discovered two human skulls, obviously very old and half disintegrated. Then I awoke."

"I saw from this that he was completely helpless in dealing with certain kinds of dreams and had to take refuge in his doctrine. I realized that it was up to me to find out the real meaning of the dream.
It was plain to me that the house represented a kind of image of the psyche--that is to say, of my then state of consciousness, with hitherto unconscious additions. Consciousness was represented by the salon. It had an inhabited atmosphere, in spite of its antiquated style.
The ground floor stood for the first level of the unconscious. The deeper I went, the more alien and the darker the scene came. In the cave, I discovered remains of a primitive culture, that is, the world of the primitive man within myself--a world which can scarcely be reached or illuminated by consciousness. The primitive psyche of man borders on the life of the animal soul, just as the caves of prehistoric times were usually inhabit by animals before men laid claim to them.
During this period I became aware of how keenly I felt the difference between Freud's intellectual attitude and mine. I had grown up in the intensely historical atmosphere of Basel at the end of the nineteenth century, and had acquired, thanks to reading the old philosophers, some knowledge of the history of Psychology. When I thought about dreams and the contents of the unconscious, I never did so without making historical comparisons;... . I was especially familiar with the writers of the eighteenth and early nineteenth century. Theirs was the world which had formed the atmosphere of my first-story salon. By contrast, I had the impression that Freud's intellectual history began with Buchner, Moleschott, Du Bois-Reymond, and Darwin."

"The dream pointed out that there were further reaches to the state of consciousness... : the long uninhabited ground floor in medieval style, then the Roman cellar, and finally the prehistoric cave. These signified past times and passed stages of consciousness.
Certain questions had been much on my mind during the days preceding this dream. They were: On what premises is Freudian psychology founded? [...] What is the relationship of its almost exclusive personalism to general historical assumptions? My dream was giving me the answer. It obviously pointed to the foundations of cultural history--a history of successive layers of consciousness. My dream thus constituted a kind of structural diagram of the human psyche; it postulated something of an altogether impersonal nature underlying that psyche. It 'clicked,' as the English have it--and the dream became for me a guiding image... .
This was my first inkling of a collective a priori beneath the personal psyche."

"The dream of the house had a curious effect upon me: it revived my old interest in archaeology. After I had returned to Zurich I took up a book on Babylonian excavations, and read various works on myths."

"Perhaps I may be allowed a comparison: it is as though we had to describe and explain a building whose upper storey was erected in the nineteenth century, the ground floor dates back to the sixteenth century, and careful examination of the masonary reveals that it was reconstructed from a tower built in the eleventh century. In the cellar we come upon Roman foundations, and under the cellar a choked-up cave with neo-lithic tools in the upper layer and remnants of fauna from the same period inthe lower layers. That would be the picture of our psychic structure. We live on the upper storey and are only aware that the lower storey is slightly old-fashioned. As to what lies beneath the earth's surface, of that we remain totally unconscious.
This is a lame analogy.. for in the psyche there is nothing that is just a dead relic. Everything is alive, and our upper story, consciousness, is continually influenced by its living and active foundations. Like the building, it is sustained and supported by them."]

"Before I discovered alchemy, I had a series of dreams which repeatedly dealt with the same theme. Beside my house stood another, that is to say, another wing or annex, which was strange to me. Each time I would wonder in my dream why I did not know this house, although it had apparently always been there. Finally came a dream in which I reached the other wing. I discovered there a wonderful library, dating largely from the sixteenth and seventeenth centuries. Large, fat folio volumes, bound in pigskin, stood along the walls. Among them were a number of books embellished with copper engravings of a strange character, and illustrations containing curious symbols such as I had never seen before. At the time I did not know to what they referred; only much later did I recognize them as alchemical symbols. In the dream I was conscious only of the fascination exerted by them and by the entire library. It was a collection of medieval incunabula and sixteenth century prints.
The unknown wing of the house was... an aspect of myself; it represented something that belonged to me but of which I was not yet conscious. It, and especially the library, referred to alchemy, of which I was ignorant, but which I was soon to study. Some fifteen years later I had assembled a library very like the one in the dream."

"The late alchemical texts are fantastic and baroque; only after we have learned how to interpret them can we recognize what treasures they hide."

"Occasionally I would look at the pictures, and each time I would think, 'Good Lord, what nonsense! This stuff is impossible to understand.' [...] Finally I realized that the alchemists were talking in symbols- those old acquaintances of mine. 'Why, this is fantastic,' I thought. 'I simply must learn to decipher all this.'"

"I therefore decided to start a lexicon of key phrases with cross references. [...] I worked along philological lines, as if I were trying to solve the riddle of an unknown language."

"I had very soon seen that analytical psychology coincided in a most curious way with alchemy. The experiences of the alchemists were, in a sense, my experiences, and their world was my world. This was, of course, a momentous discovery: I had stumbled upon the historical counterpart of my psychology of the unconscious. The possibility of a comparison with alchemy, and the uninterrupted intellectual chain back to Gnosticism, gave substance to my psychology. When I pored over these old texts everything fell into place: the fantasy-images, the empirical material I had gathered in my practice, and the conclusions I had drawn from it. I now began to understand what these psychic contents meant when seen in historical perspective. My understanding of their typical character, which had already begun with my investigation of myths, was deepened. The primordial images and the nature of the archetype took a central place in my researches, and it became clear to me that without history there can be no psychology, and certainly no psychology of the unconscious."